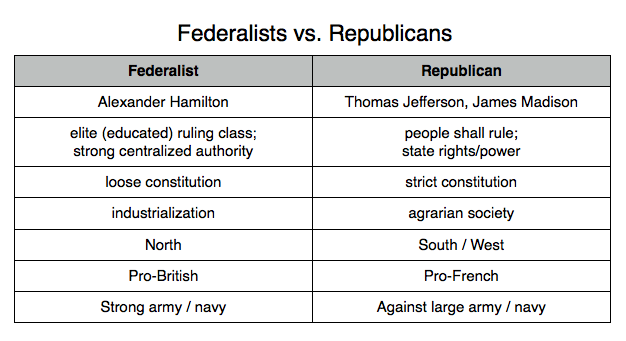 [America’s Neutrality]
- French Revolution : Federalists opposed it while Republicans praised it
- Citizen Genet (1793) : France sent Edmond Genet to SC to win Americans’ supports for the France in French-Anglo War
- w/out U.S. consensus, tried to enlist Americans
- Washington asked France to take him back (and Jefferson had to agree Genet had gone off the boundary)
- Jay’s Treaty (1794 / ratified in 1795) : With Britain
- agreed to: 1) leave the forts in the Northwest Territory (along Great Lakes); 2) expanded trades
- couldn’t agree to: Britain stopping & searching American ships
- People didn’t like this treaty because it didn’t do much
- Pinckney’s Treaty (1795) : With Spain
- Spain gave America rights to navigate the Mississippi and access to New Orleans to unload cargoes
- agreed to fix northern boundary of Florida along 31st boundary
- no Indian raids across the border